The heat exchanger has been one of the indispensable equipments in marine engine, which can be applied in the main and auxiliary oil cooler, cylinder liner fresh water cooler, fuel heater, steam condensers, water heater and other equipments. The special working environment of the ship has very special demanding on the heat exchanger, including the factors such as instability in the sea, which may encounter vibration, shock, large angle tilt and noise. The cooling medium is usually seawater, which is with high salt concentration, high humidity of the working environment, and very strong corrosion of the plate. The marine itself is very compact in structure, having more stringent restrictions on the heat exchanger space and quality. The heat transfer medium of traditional heat exchanger is always water, and the heat transfer medium of marine heat exchangers is generally oil and water and so on. The emergence of plate heat exchanger effectively solves a large part of the problem. At present the plate heat exchanger, used in the ship turbine is generally considered smaller than the traditional heat exchanger, with very small volume. For this purpose, finite element analysis is used. At the same time, in order to meet the requirements of marine equipments, the unnecessary parts of the plate are removed or reduced according to the actual stress and strain distribution, and the weak parts are locally thickened. Put gas cutting method on the whole body to reduce the influence of welding deformation on the strength, and weld together the inner plate and the panel, then eliminate the residual stress. It will be able to make the use of equipment as much as possible on the installation in limited space, to bring more benefits; it will complete the heat transfer work to ensure the normal use of the marine.

Using multi-point fixed method on the bottom of the board, that is, all fixed parts can be used fixed connection. Some important special parts also use a rib structure, which increases the stability of the equipment. Only when the installation stability is improved, the heat exchange efficiency and effect of the heat exchanger can be ensured. It will affect the heat transfer effect, once it occurs due to problems such as vibration,

Since many turbines are in direct contact with seawater, they have a very large effect on the heat transfer medium during use. Therefore, at present, the plate used in the turbine is usually made of a material with high corrosion resistance, such as titanium material, and its quality is much smaller than that of stainless steel. In order to ensure the quality of the titanium plate, in addition to the routine inspection, the plate is also subjected to 100% color penetration test to further eliminate the error when the board is sampled.

Plate heat exchangers are inexpensive and its production process is very mature. During production or maintenance, we can reduce costs and increase efficiency as much as possible. It can be cleaned by loosening the screws in the mounting structure and reassemble to use again. If it is already damaged, then we can just change a new one. Its low price enables it be prepared in emergency equipment.

Some of the mechanical equipment in the diesel engine power produces heat in the normal operation. The heat must be distributed in time; otherwise the heating element temperature will continue to rise, more than allowable limits and will damage the reliability of mechanical equipment. In order to distribute these calories immediately in efficient manner, in common let a certain amount of liquid to flow continuously through the heat sink and bring the heat out of the equipment. Cooling systems typically use fresh water, seawater or river water as a cooling medium.

A lot of heat took away by cooling system is residual heat burn done by fuel, generally about 20% to 30%. As the diesel engine is one of a heat engine, is to rely on the combustion of fuel heat to work, so it is loose to take away the heat. Obviously, the more the intense of cooling, the greater the loss of this part is, and the more obviously the reduction of diesel economy. On the other hand, since the temperature of the heat-receiving member is high, the average temperature in the inner wall of the cylinder can reach 200 ° C to 300 ° C, and the surface temperature in contact with the cooling water is low, the thermal stress is liable to occur at such a temperature difference. The temperature difference is too large to crack the part.

It can be seen, the diesel engine has strict requirements on cooling process. The effect of the cooling system is to cool the diesel engine forced, the temperature of each heated part is controlled within the allowable range and at the same time maintain the proper cooling water temperature and use the proper cooling medium to ensure its normal and reliable operation.

In determining the temperature of the cooling water, it is necessary to take full account of the lack of cooling or excessive cooling. Such as the lack of cooling will make the parts overheated, resulting in mechanical properties of materials decreased, so as to have thermal stress and deformation, damaged the surface normal gap, also resulting in wearing excessively and even damaged. Cooling will also bring too high oil temperature; shorten the service life of oil to cause oil deterioration and coking, destruct oil film to loss lubrication. On the contrary, the excessive cooling will allow the coolant to take too much heat, reduced the diesel economy. While using oil with high sulfur, the excessive cooling will make the cylinder to form sulfuric acid and corrosion of the cylinder wall and piston. Therefore, the thermal equilibrium calculation of the cooling water system is very important.

In the use of diesel power plant on the ship, the need for cooling machineries and equipments are:

③ shaft bearings and so on.

The open cooling water system refers to the diesel engine is cooled by itself directly by outboard water or river water.

The advantage of the open system is that the unit is easy to manage and maintain. The disadvantage is that the quality of outboard water is poor, the river water contained impurities and seawater contained a variety of chlorinated salt, which will block the cooling space or cause corrosion of the parts and produce scale to reduce thermal efficiency. For the precipitation of salt, the sea water temperature should be below 50 ~ 55 ℃, high temperature parts cannot be used. Because the diesel engine cooling water temperature is generally above 60 ℃, high speed machine should reach 80 ℃ ~ 90 ℃. So now in addition to river boat, the open system is not applied.

⑴ cycled in the machine is clean fresh water, not easy to clogging.

⑵ clean water is not easy to fouling, to ensure good heat transfer effect and extend the service life of components.

⑶ not subject to seawater precipitation of salt temperature limit, can use a higher cooling water temperature to improve thermal efficiency.

⑷ shorten the warm cylinder time, improve mobility. When the tank is warm, the fresh water does not pass through the cooler or closes the seawater.

In order to make the mechanical equipment other than the host enigine are also use fresh water, and with a system cooling to form a central cooling water system. If some of the equipments are cooled with sea water alone, which is called mixed cooling system.

In some high-speed ships such as container ships, ships, etc., its central cooler low-temperature fresh water cooler, also known as bucket cooler, can also be designed to cool the seawater obtained by the speed of the ship’s sailing, called the self-flow central cooling system, which is a special form of the independent type I.

Its working principle is the sea water pump inhale the sea from the seawater gate and seawater pipes, and then divided into two ways: one way is to the host of the air cooler, another way is to send sea water into the oil cooler, and then after the fresh water cooler flow together with discharged water from the host air cooler, through the three-way thermostat directly go outboard or back to the seawater pump inlet. 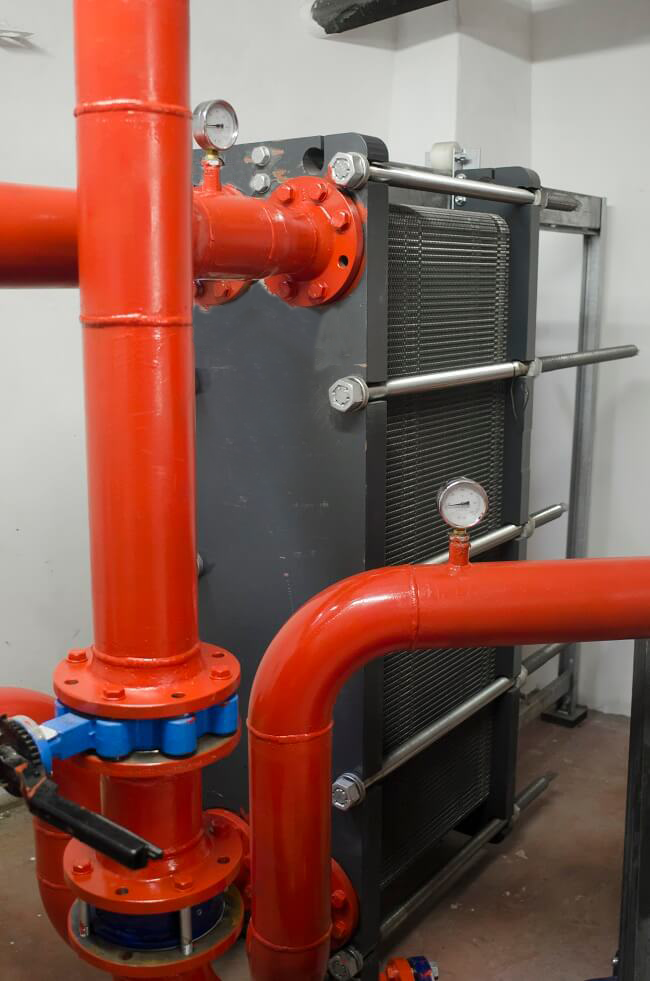 In the host fresh water discharge pipeline, installed parallel a water machine or a light system, using high temperature fresh water waste heat to make fresh water, as added fresh water on board to use. It is an energy-saving device.

2) Expel the vaporized gas in the pipeline due to local heat out of the system. Thus at the highest point of fresh water exports are generally connected a ventilation pipe, and connected with expansion tank.

3) Can using the static pressure head in the expansion of the water tank, so that the suction pipe always maintain at a high water pressure, to avoid the low-pressure vaporization in the pipe, to maintain pressure stability

4) Can use the expansion tank to add fresh water loss

The cryogenic freshwater circuit is also a closed loop system. The whole loop is the same as the conventional seawater cooling system, but itselt must also be cooled by seawater. In the actual ship, low-temperature water is also divided into several ways: diesel generators air coolers, air compressors, air conditioning, refrigeration, atmospheric condensers and other cooling. The system is much more complex.

The three-way thermostatic valve in this circuit is installed in the central cooler outlet. The outlet temperature of the cryogenic fresh water cooler is generally controlled at 36 ° C. It also installed a special low temperature water expansion tank.

Where the system is located in two pumps, one of the pumps is spare and required start automatically and make conversion.