Brazed plate heat exchanger (BPHE) is a kind of partition heat exchanger. It is a type of high-efficiency heat exchanger made by stacking a series of metal sheets with a certain corrugated shape and brazing in a vacuum furnace. Thin rectangular channels are formed between various plates, and heat exchange is carried out through the plates.

Brazed plate heat exchanger is composed of front and rear plates, plates, joints and copper foil. The copper foil is melted in a vacuum furnace, and the molten copper liquid flows between the narrow gaps of the heat exchanger by using the siphon principle, and the brazing is formed after cooling.

G. Pressure Test and Other Processes. 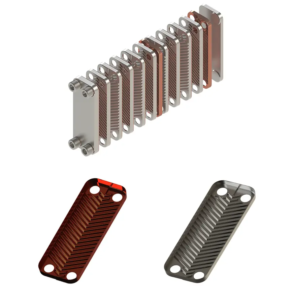 Compact – Our blazed plate heat exchangers are extremely compact compared with other technologies. The carbon footprint can be as little as one tenth that of a shell and tube heat exchanger or half that of a gasket plate heat exchanger.
Efficient – With no need for gaskets or supporting equipment, about 95% of the material is used to transfer heat. The highly turbulent flow also enables you to use small temperature differences efficiently.
Reliable – The robust construction requires no gaskets, eliminating their risk of leaking. This means stable thermal and hydraulic performance, with minimal maintenance and operational downtime.
Flexible – The compact size uses space efficiently and makes system design more flexible. Larger installations can be constructed unit by unit via standard doors and elevators, and it is easy to expand capacity when demand increases.
Cost-effective – You will save on energy, maintenance, spare parts, and installation. The life-cycle cost over 15-20 years can often be half that of a corresponding gasketed solution.
Self-cleaning – Our brazed plate heat exchangers are normally self-cleaning, thanks to highly turbulent flows. In applications with a high risk of fouling or scaling, Cleaning in Place is easy without disassembly. Read more about plate heat exchanger cleaning.
Customized – By combining plate design, materials, and connections from standard components, we keep lead times short while still maximizing output in your specific application

Certain BPHEs are available with different types of channel plates where the herringbone pattern varies. The benefit of different herringbone patterns is that the hydraulic and thermal characteristics of the BPHE can be modified. For example, two BPHEs can have the same pressure drop on both sides despite different flow rates.

The fluids can pass through the heat exchanger in different ways. For parallel flow BPHEs, there are two different flow configurations: co-current or counter-current (click images on the right).

There are several different versions of the channel plate packages. Examples include: 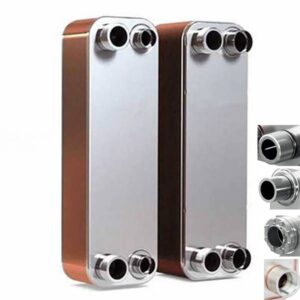 Please leave your messages here, and we will reach to you soon!