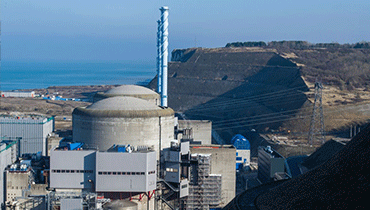 Today’s nuclear power infrastructure was born out of the French government’s efforts in the 1950s and 1960s to develop a nuclear bomb during the cold war, and so a lot of resources were poured into nuclear research. That created the expertise, then in the 1970s the oil-price shock turned attentions towards nuclear-power development. Countries began to rethink their energy strategies as they tried to reduce dependence on foreign oil.

For France, the answer was nuclear power and, in 1974, prime minister Pierre Messmer even expressed a desire that all of France’s electricity should come from nuclear power. Although that didn’t happen, the 1980s and 1990s saw a rapid expansion of nuclear power capacity in France: 56 reactors were built in just 15 years. This created a critical mass of both knowledge and infrastructure that really allowed nuclear power to establish itself, but not everyone agreed it was a good thing.

A lot of people still don’t want nuclear. Activists in the environmental movements say they want only renewable energy, but that’s technically a very difficult thing to pull off. I don’t think Macron was particularly interested in this topic during his first term, so he just followed the political precedent set by his socialist predecessor, François Hollande, who closed a nuclear power station in the final months of his presidency.

But the question of climate change and how to manage greenhouse-gas emissions has become increasingly pertinent. In a 2022 paper I published with collaborators, we investigated the environmental impacts of four electricity-production scenarios with differing levels of nuclear output (B. Cassoret et al. Int. J. Green Energy https://doi.org/h94w; 2022). Solar and wind systems take quite a bit of power to install and require more building materials than do the scenarios that lean more heavily on nuclear. Of course, nuclear power in France also has the advantage of a well-established existing network.

We concluded that the scenarios with a large percentage of nuclear power, such as France’s current nuclear portfolio, have the lowest environmental impact. If we don’t want to produce energy from fossil fuels, which is essentially the problem we’re all trying to solve here, then the most stable answer is nuclear energy. We don’t necessarily need to be at 70%, but perhaps 50% will be required.

I think Macron has now come around to this point of view, which is clear in his speeches when he talks about energy policy, but Mélenchon’s coalition might try to prevent the reactors from being built.