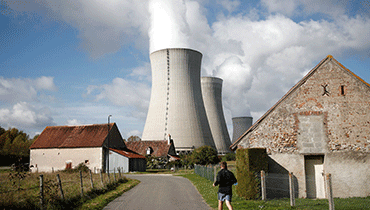 No other country produces more nuclear power per capita. But climate change, Russia’s invasion of Ukraine and French politics could change that.

Around 70% of French electricity is derived from the splitting of atoms, and no other country produces more nuclear power per capita. More than a means of keeping the lights on, France’s prowess in the nuclear space is also a source of national pride — the amalgamation of decades of research that stretch back to the discovery of polonium and radium by Marie Skłodowska Curie and Pierre Curie in Paris in the late 1890s.

Today, nuclear energy earns the country more than €3 billion (US$3 billion) per year in electricity exports. This has taken on fresh saliency as global energy prices spike in response to Russia’s invasion of Ukraine.

Yet the nuclear energy industry in France is facing significant challenges. Climate change, for example, is already hampering French nuclear output. An especially hot and dry summer has warmed the country’s rivers and lowered water levels, reducing the ability of its energy companies to use the water to cool nuclear reactors. Some power plants are beginning to show their age and require extensive maintenance for corrosion damage, which could end up taking years. All of this has conspired to force half of France’s nuclear reactors offline for now. This couldn’t have come at a worse time: Europe’s energy prices and supplies are already under immense pressure following the invasion of Ukraine.

Politics is also at play. In the wake of presidential and parliamentary elections this year, the future of nuclear energy in France seems less certain.

Critics of centrist President Emmanuel Macron, who was re-elected in April for a second five-year term, accuse him of being inconsistent on nuclear policy. He previously promised to reduce France’s reliance on nuclear energy, and 2 years ago he pushed ahead with shutting a 42-year-old plant in Fessenheim, close to the border with Germany. Macron’s tone has since shifted: in February, he announced plans to build 6 new reactors at an estimated cost of €50 billion, with the first coming online by 2035.

To achieve this, however, he will need the backing of parliament, which is likely to be difficult following legislative elections in June. The coalition that includes Macron’s Renaissance party won 42.5% of seats — more than any other party, but not enough to keep a governing majority. Voters instead endorsed parties from the far right and left. The coalition of left-wing parties, led by anti-nuclear politician Jean-Luc Mélenchon, gained 22.7% of seats. The far right, led by pro-nuclear politician Marine Le Pen, took 15.4% — but cutting a deal with Le Pen, who is a long-time presidential rival of Macron, could prove politically problematic. Those who work in or study nuclear power in France are wondering what this means for the industry. Nature spoke to four specialists, each with their own perspective on what this political climate could mean for the future of nuclear power.